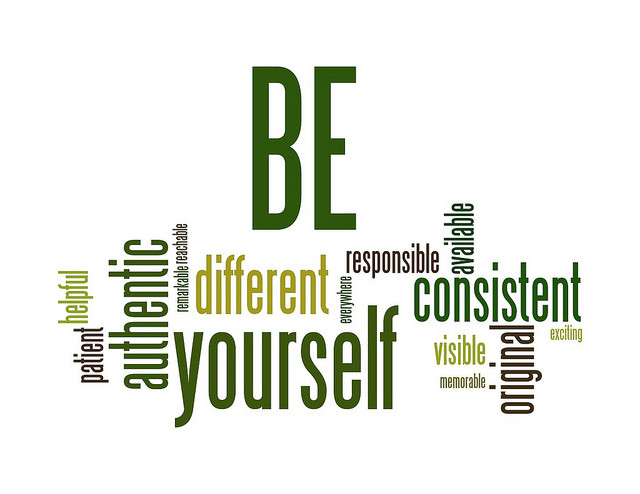 Sometimes people tell you to “just be yourself” because they like you and assume other people will, too. They say that to you before you go on a date. Before a job interview. Before a public speaking event. Before going somewhere where you’ll meet a bunch of strangers.

We have heard it so many times that most of us don’t even know what it means. Many of us spend a ton of energy trying to be the person we think others want us to be because we’re ashamed of ourselves or because we’re afraid no one will like the real us.

Many of us seem incapable of forming our own opinion of ourselves. We pretend to know what other people think about us, guess wrong some of the time, and then we use that as our identity.

Not only do we let other people dictate our self-worth, but we actually let incorrect assumptions about what other people think about us dictate it.

I think sometimes they just never really knew each other in the first place.

It was about 4 p.m. Friday when I pulled into my hometown. A little Ohio town of about 20,000 people a few hours from where I live.

My friend and I get together every year to nerd out over the NFL Draft. He’s an attorney and needed to get some work done before meeting me so I slipped into a new bar and restaurant next door to his law offices to wait for him. I sat at the bar and had a few drinks. A little more than an hour later, he showed up.

By then, I’d met the owner and learned a lot about him and his business endeavors, discovered one of the girls working there is related to some old high school friends, and was drinking mystery shots with the pretty bar manager. We had one more drink and got out of there.

Before leaving, I went over to shake hands and say bye to the people I’d met. A good time was had.

As we were walking out the door, my friend who has known me since we were six—a guy who charms juries for a living—looked at me and said: “You’re better with people than anyone I’ve ever seen.”

I haven’t stopped thinking about that since.

Many people misrepresent themselves while dating or during job interviews. Basically, they’re frauds. A lot of us do this in really small matters. It gets scarier and more painful over really big things. And when you’re a fraud, it’s only a matter of time before you’re exposed.

It’s why sometimes two people meet and pretend to be different than they actually are, and both people like the fake versions of one another, but then after getting to know each other, there’s no compatibility or chemistry and the relationship crashes and burns. I’m pretty sure that happens 147 million times every day.

I think it’s important to be yourself, and I’m really trying hard to stop pretending to be something I’m not, even over little things designed to get someone to like me more.

It’s about identifying your values.

It’s about establishing your boundaries.

It’s about being authentic.

Over time, the number of people who share your values, respect your boundaries, and are attracted to your authentic self romantically, spiritually, physically, and professionally, will grow.

I’m pretty sure for every person that likes the fake me, there are just as many people who like the real me.

I’m pretty sure for every girl who likes tattooed felons, there are just as many who prefer me or someone like me. People who read and think and talk and can spell and speak coherent sentences.

People are afraid of rejection so they go into self-preservation mode rather than put themselves out there. But the truth is rejection from a stranger isn’t a 100th as bad as rejection from someone you love.

I think sometimes they just never really knew each other in the first place.

I bet 100-percent of people who worry about what other people think of them spend a lot of time pretending to be someone they are not on matters big and small.

It’s dishonest. Lying, essentially. All the pretending drains you and makes you a suckier version of yourself.

“This is not religious but math. The brain takes up 2% of the body’s mass and burns up 25% of the body’s calories each day. One in four calories you eat goes to fuel your brain.

So to be at optimal mental strength you now need twice as many calories. This is impossible.

So the best way to be mentally strong is to be honest so all of the fuel in your body can be used efficiently at propelling your brain from strength to strength instead of fighting off the attacks on your weaknesses.”

People are attracted to people who know themselves and are confident being whatever that is. A confident person understands that they are who they are and that the only people worth spending time with are the people who like and accept that authentic person.

People choose who they’re going to spend time with based on how they feel around that person.

Two authentic people being emotionally vulnerable can form virtually unbreakable lifetime bonds. And those are the best kind.

I wish people knew it was okay to be themselves. Our need for acceptance and fear of rejection makes us pretend sometimes.

We just want to be liked.

But when we’re really honest about who we are and what we want… when we are actively passionate about things we care about… we won’t just be liked.

And all this time. Who knew? All you had to be was you.