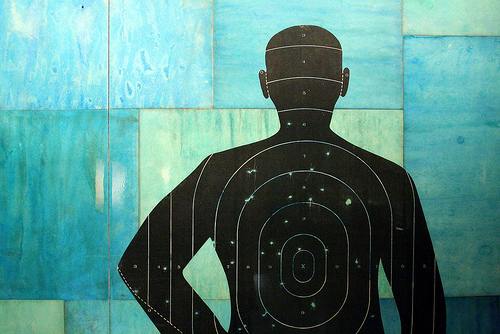 When life coach and motivational speaker Tony Robbins was 24, he wanted to train U.S. soldiers to shoot better, despite having never fired a gun.

How can I—a guy who has never shot a gun—teach someone else to improve their shooting?, he wondered.

The first thing he did was find five sharpshooting experts and interview them extensively. He then cross-referenced his notes from all five interviews and found commonalities among them.

From those conversations he formulated his strategy for improving the accuracy of soldiers’ shooting: Bring the target closer.

This incremental and confidence-building improvement strategy increased shooting accuracy in the school by 50 percent.

All from the mind of a guy who had never before fired a gun.

I read about this yesterday in James Altucher’s excellent “10 Things I Learned While Interviewing Tony Robbins About His New Book ‘Money’.”

Altucher added one more anecdote from Robbins that really resonated with me.

“Tony told us of one time he asked people what their goals were. One guy said, ‘I want to make a billion dollars!’ At first this would seem like an admirable goal—set it high! There’s that horrible saying, “Aim for the moon, because even if you miss it you’ll find yourself among the stars.

“But Tony said, this guy didn’t really understand his goal.

“By the end of that session,” Tony said, “it turns out to achieve the exact lifestyle he thought he needed a billion for, he needed $10 million.” This is still a lot of money but this was Tony’s way of bringing the target closer.

“When I read that in his book, I did the exercise with Claudia (James’ wife). Her numbers went down by 90% when we really went through it. What happens then? You feel relief. You don’t have to be on the hamster wheel of money for your whole life. What you want is freedom, not money.”

The Five Steps to Succeed at Anything

In the interview with Robbins, Altucher said, “Ok, I figured it out. You use ‘the Tony Robbins Method’”. Which he defined as:

1. At first you don’t know anything.

2. You find five people who are the experts in the world.

3. You extensively interview them.

4. You figure out the most simple things they have in common with each other.

And that’s how you succeed at anything.

Whenever I move to a new city, I find I’m always travelling the main streets and busiest thoroughfares at first because they’re the easiest to remember and the first ones you get to know as you’re learning your way around.

After a year or two in a place? I learn all the side streets and back roads. The ones that help me avoid busy, annoying intersections, or help me efficiently navigate obstacles, or shave minutes off my work commute.

I learn the shortcuts and become a proficient driver only after learning the long way first.

To physical fitness or attractiveness.

To love or sex or friends or success.

And maybe that’s a bad plan. Maybe if we accidentally find ways to improve speed and efficiency, it’s great or fortunate or because we’re fast learners.

But maybe most of the time the best way to get really good at something is to really embrace that incremental improvement mentality.

Maybe the best way to improve our lives is to always make sure we’re looking at goals differently.

You want to have a happy marriage?

Practice communicating with kindness and patience, no matter what. Love without expecting or demanding anything in return.

Never say mean things. Ever. And if you can never say something mean to your spouse for one day, maybe you can do it for two. And three. And four. And maybe after a month of kindness you realize you can do it every day and that it’s worth it because you feel peace and happiness you’ve never felt before.

How long before I’d be the strongest I’d ever been?

We have these small successes. And we know we can improve upon them the next time. We can ALWAYS improve. Just 1%.

And then someone asks you how you are.

10 thoughts on “Bring the Target Closer”