How to Scare Bruce Lee and Get Awesome at Stuff

Comments 23
I remember looking at the non-alphabetized letters on the keyboard and being amazed that people knew how to type fast.

I was a little kid, and an older kid named Justin was watching me and some friends at one of their homes while our parents went out. The family had a computer even though not everyone had personal computers back then.

Justin said he knew all the keys. We didn’t believe him.

We blindfolded him at the desk chair and then yelled out random letters, totally mesmerized as he always found the correct key.

Amazing! How’s he doing that!?

When I was little, I was afraid of the deep ends of swimming pools because when I was 3 some little shit pushed me into a public pool and I sank to the bottom until the lifeguard and my mother pulled me out, but not before I was thoroughly terrified. I was probably 9 before I was confident and comfortable jumping into the deep end of a pool. And now? I’m no Michael Phelps, but I’m a competent, capable swimmer and enjoy it very much. Even in deep water like the Gulf of Mexico where I foolishly often swam alone upon first moving near a Florida beach after college.

I remember not being able to ride a bike.

I remember not being able to tie shoes.

I remember reading or hearing words I didn’t understand. 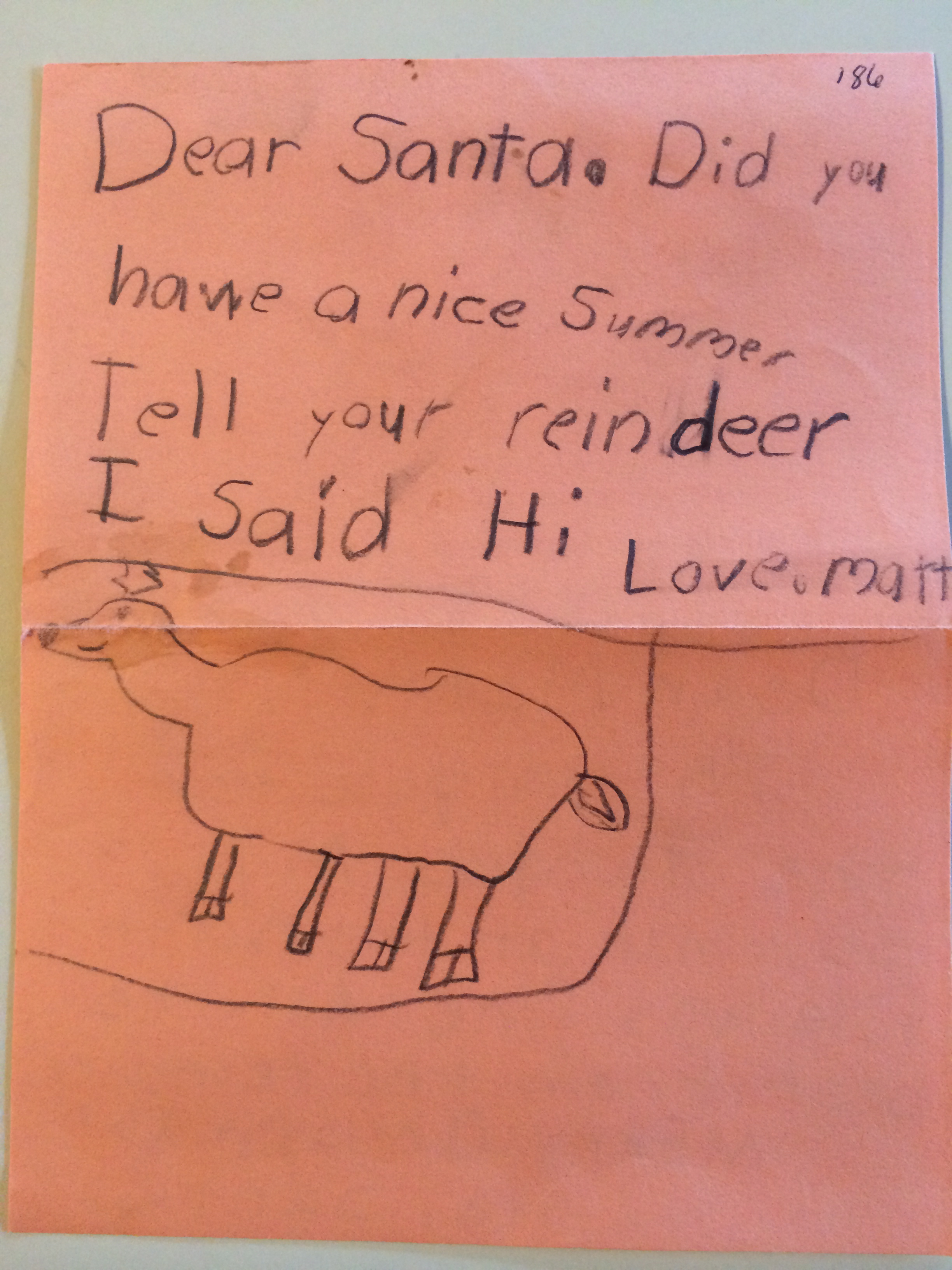 That’s how shitty I was at writing (and drawing reindeer). I found it in my baby book, along with this turd from the following Christmas:

Please give me the Ecto 1 and Headquarters

And then I drew Santa a crappy picture of himself with a black ink pen. He had just one boot on and a bunch of stars surround his face. It’s a terrible drawing and makes no sense. It’s because I was little.

Today, I’m the fastest typist I know. I’m a fine swimmer, I don’t fall down on bikes, I tie my shoes with the best of them, and my vocabulary is well above average.

Some of these things I practiced because they were taught in school or because all my friends were doing them.

In no instance did I set out to achieve mastery.

Because that’s always the net result of doing something over and over again. (Except golf. That would appear to be a notable exception to this rule.)

Lee was smart. He knew that anyone who does something 10,000 times becomes skilled at that thing.

Something about it resonated with me.

Probably because I’m the kind of person who likes to do lots of different things. I have many interests and am pretty good at a bunch of stuff but not particularly great at any one thing.

It would be fun or rewarding to be GREAT at something.

If you were in a hurry, you could practice something (like a specific kick in Kung Fu) 500 times daily and hit that 10,000 number in just 20 days.

Some of you are probably rolling your eyes. “THAT’S your point? Practice shit? Totally heard that one before, Matt. Thanks.”

I get it! I just think it’s really powerful to realize how great we are at all these random things (even if they’re super-simple like driving, or brushing teeth, or mowing grass, or making food, or whatever) simply by doing them many times. And I think it’s motivating to realize we could get REALLY good at something in three short weeks if we committed to becoming so.

I think sometimes we feel afraid. I’m almost always intimidated by learning how to do something new. It’s magnified when it’s in a strange environment while being watched by people I don’t know.

I’m STILL afraid (pretty much 100-percent of the time no matter how confident I feel five seconds beforehand) to introduce myself to a girl I don’t know at a party or bar or store or whatever.

Everyone has different fears. Usually irrational. But they’re real. And they hold us back from being as happy or successful or fun as we could be.

A lack of confidence is always the reason. When we don’t know how something is going to turn out, it scares us.

I was intimidated by this keyboard I’m using 20 years ago when I had no idea how I’d ever type accurately without looking at the keys. Now, I’m a typing badass.

I look down at my shoes. I used to slowly fumble around with the laces. Sometimes, I’d have to try a second or third time to get it right. But then I figured it out. And I’ve now tied shoes nearly every day for about 30 years. I’m a shoe-tying sensei. I’m amazing at it.

I can swim and ride bikes and I know so many words now because I read and write and talk so much.

Do something 10,000 times, and you’re not just playing. You’re winning.

What could we master with a few weeks or few months of repetitive practice?

I think if we can make Bruce Lee a tiny bit afraid of us, we can do pretty much anything.

(Thanks to my favorite writer James Altucher for inspiring this post.)