This Isn’t Advice, and You Shouldn’t Take It 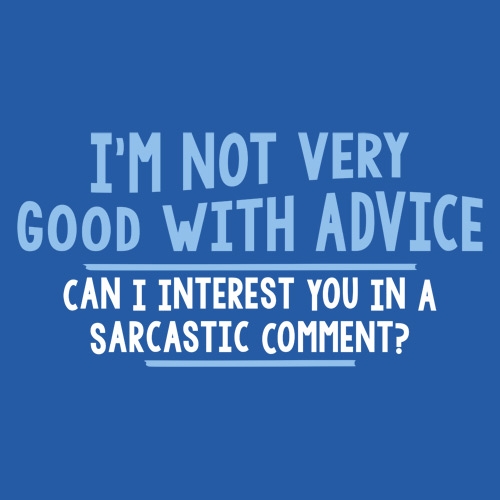 I do not write an advice column.

I don’t want to be a life coach, I don’t think I’m smart and I don’t believe people’s lives will be better if they act like me.

I failed Intro to Computing TWICE my freshman year of college. This challenging class included the basics of Microsoft Word, Microsoft Excel and Microsoft PowerPoint. I failed it because I liked smoking pot and having fun more than I liked going to that class.

When I was the editor of my college newspaper, I let a story run with an anonymous source who claimed to be a sophomore female student in the College of Pharmacy’s honors program. She was bragging about how much she liked taking the drug MDMA, which most of us know as Ecstasy.

Turns out there were only eight sophomore female students in the Pharmacy honors program that year, and our source WASN’T one of them. I never bothered to vet her ahead of time. Maybe I was high. She had lied about being in the honors program. And eight completely innocent students at my university were made to look like assholes.

But really I was the asshole.

I used to lie about the cost of candy I was selling for school and pocket the extra money.

I accidentally let my car insurance lapse earlier this year and drove around for a while not even realizing I wasn’t insured.

I forget shit all the time unless it’s something I’m super-stressed about or have a reminder note written.

I’m not particularly intelligent. I’m far from being the responsible adult I aspire to be.

My dad has been divorced once.

My mom has been divorced twice.

And I’ve now been divorced. I cried like a total pansy a bunch of times for months afterward.

I don’t have a fucking clue what a super-healthy, super-functional marriage looks like from the inside. And I’m really sorry if anyone is or was under the impression that I did think that.

Some People Don’t Think You Should Listen to Me

I don’t disagree with them.

I wrote a series of posts called An Open Letter to Shitty Husbands. They’re my most popular posts by a mile, because I think sad and pissed-off wives like seeing a guy figure out why his marriage got toxic because he did all the same stupid things their husbands do. I think these women are hopeful that maybe their significant others can come to the same conclusions I did. I think these posts validate all of the things they feel and that they’ve tried to explain to their husbands and boyfriends for years. And finally! A guy gets it.

It took that fear of losing my marriage—that motivation to avoid it—to exert the energy to learn what was happening in my relationship. I read books. I prayed. I talked to people.

And it started to become really clear how all these little things I had been selfishly and obliviously doing for years made my wife feel how she did.

Anyway, An Open Letter to Shitty Husbands Vols. 1, 4 and 6 get shared a decent amount on Facebook. (For the record, Vol. 4 and Vol. 6 are the only ones I think have much value. Vol. 2 is a preachy, shitty post and I should take it down because it reads like a total asshole wrote it. No one likes being preached to.)

I’m not privy to any of the comments people make about those posts on Facebook.

But a couple days ago, someone shared Vol. 1 on Reddit and a few readers were not impressed. I was able to check those out.

“This article, and the other volumes I read look more like the manifesto of a depressed and guilty man who thinks he is the sole reason his wife left him. He talks as if he ruined their marriage because he didn’t treat her like a princess… Then goes on later to say that you both have to give 100% to the marriage – Did she treat him like a king? The volumes I read were overtly abrasive and erroneously absolute, I guess to hook the reader, but it’s hyperbole and generalizations out the ass. I don’t think people should read too much into a recovering divorcee’s self-help writing therapy.”

The writer made that last sentence bold to emphasize it.

And terminite, I’m sure, is right. You SHOULD NOT read too much into a recovering divorcee’s writing on marriage. It’s not as if I was good at it.

But let’s get something straight, because it’s REALLY important:

I write about marital things, shouldering the lion’s share of blame and responsibility, and encouraging men to do their part in their relationships because I think it’s really important to take responsibility for your place in life.

Who am I to tell women what they should do as wives? I don’t know the first thing about being female or a wife.

I figure I have two choices: I can either point fingers and scream and pout and call my ex-wife a bunch of names and blame everything on her.

I can be an adult and take responsibility for what I did and let the rest sort itself out.

Of course I don’t think my ex-wife got everything right. I was a ragey sonofabitch for a while after she left. Of course I felt justifiably pissed off dozens of times during our marriage.

But I’m not going to sit around telling men to just stand their ground and keep doing what they’re doing when I KNOW half of them are going to end up divorced if they do, and another large chunk will spend years suffering through a shitty, loveless marriage “for the kids.”

Why not the husband?

“We’re obviously not getting his whole story. The Masters example is a poor one, I think. I’m certain he fucked up greater than that, and much more often. And probably a lot of little things that compounded into years of resentment.”

No. You’re not getting the whole story, terminite. I was married for nine years AND I have a shitty memory. I could write an encyclopedia-sized volume of fuckups if I could only remember all of them.

“I really think you’re right in saying that this isn’t a reliable source of marital advice and more him trying to process what he felt went wrong.”

She seems to get it.

“I agree. I don’t know why his marriage failed but can guarantee it wasn’t because one Sunday he wanted “me” time instead of going on a family hike that his wife wanted.

“It appears to me this guy has no idea why his marriage failed and I don’t know why anyone would take his writing as good advice.”

“He probably did this all the time to her. I am always alone and doing things alone. When my husband is not working, all he wants to do is watch TV or be in another room from me. We have only been married 3 years. It’s hard and it makes me sad. I don’t know if I am unreasonable in the way I feel, and I often wonder if he is telling me the truth when he says he loves me.”

I don’t give advice. I’m not in the advice-giving business.

I’m in the storytelling business.

Matt did X. X= something shitty.

The result was Y. Y = something REALLY shitty.

And in the final analysis, maybe a couple people will be able to identify with my experiences and make the choice to not do X so that Y won’t happen and ruin their lives.

That last lady? The sad wife? She’s sad because her husband is essentially the same guy I was. He takes her for granted. She likes “Real Housewives” and “The Voice” and romantic comedies. And he likes video games and watching football and movies with explosions.

So he hangs out by himself to do what he wants to do. He might not even realize he’s causing harm.

But he’s committing marriage’s worst crime, after infidelity and abuse.

He’s leaving his wife alone in their marriage.

And someday it’s going to break.

I got a little defensive when I saw people treating my post like I was trying to be a marriage counselor. Part of that is because I’m naturally defensive. It’s one of my shittiest traits.

But another part of that is because I really don’t want to be seen as a guy who thinks he “knows” anything.

I don’t know anything.

I only know that sometimes I read or hear things, and combined with relevant life experience, I sometimes have some “Ah-ha!” moments that make me grow and be better.

It would be really cool to write stuff that helped people have some of those “Ah-ha!” moments once in a while, and God-willing, maybe end up in a happy, healthy relationship because of it.

An Open Letter to Shitty Husbands is just a clickable headline. I don’t really believe all these men are “shitty” husbands. And I don’t believe that men are always the assholes ruining their marriages.

But I do believe there are some small, subtle things that a man CAN and WILL do if he knows that doing them will be the difference between being married or being divorced.

I don’t think I’m smarter than you.

I don’t think I’m more insightful than you.

I CERTAINLY don’t think I know any more about marriage than people who are actually still married.

I just think there are a few guys out there that don’t know they’re getting marriage wrong and might recognize a few commonalities in my story.

And just maybe they’ll ask their wives the right questions.

And maybe then they’ll make some changes.

None of this is advice.

Just a story with a bunch of blank pages waiting to be written.

Just a bunch of blank pages hoping for a happy ending.

35 thoughts on “This Isn’t Advice, and You Shouldn’t Take It”