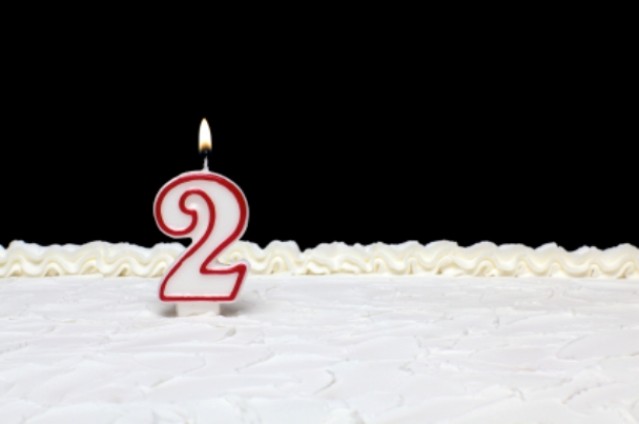 I always thought anniversaries were a little dumb.

I don’t mean celebrating wedding anniversaries or birthdays. And I don’t mean observing holidays or commemorating events of historical significance. Those are good things. All good things have merit.

But sometimes when bad things happen, we hold onto those dates and relive those feelings we felt however many years ago.

It seems so arbitrary to me. For yesterday to be typical, and tomorrow to be uneventful, but today to be a big deal.

Is today a big deal?

I don’t think so.

But not being a big deal doesn’t prevent the events of two years ago from affecting today.

I told one person about it.

She said: “I can appreciate the general unpleasant feelings that come when you wake up on the anniversary date of something bad that has happened. It kind of hangs over your day.”

I can’t say it better than that.

A splinter in your mind.

A hundred and four weeks.

That’s how long it’s been since the most-important thing that ever happened to me happened.

I’d like to tell you being born was a big deal. But I don’t feel anything when I think about it.

And I’d really like to tell you the birth of my son was more important, and if you want to have a semantics argument, I suppose we can. That was huge.

Our life and marriage had grown tired and broken and shitty.

But it was normal, at least. Something you could really count on, like the ground being there when you take your next step. Even at our worst, we would still make dinner for one another, run errands for one another, share work stories with one another.

Even at our worst, our son still had mommy and daddy tucking him in every night, and hugging and kissing him each morning.

I don’t know why April 1 stands out.

She took her ring off the day before. That one totally knocks the wind out of you.

But on April 1, it was, just, different.

There was a suitcase and a little boy who didn’t understand what was happening. All the same things you’ve seen in the movies.

No screaming. No fighting.

Just sadness so suffocating, I don’t remember being able to speak.

That was the first time I can remember crying at the kitchen window watching them drive away.

It wasn’t the last time.

So, What Happened Next?

One of the things I like to do is tell you what happened to me because it seems like a lot of people have the same experiences.

And what that means is, if your marriage just ended or some other bad thing, and you kind of feel like you want to die, you can find out what it’s like two years later in order to have something to hold onto. A gauge. A measuring stick. Something. Anything. Because when you break on the inside, you feel so lost and out of control, you need something to hold onto. Even if it’s just one stranger’s story that might be kind of like yours.

I still feel sad sometimes, but it’s just as much feeling sorry for myself as it is suffering from the loss. It’s hard to tell the difference anymore.

Maybe people with different circumstances feel less so. If you live near where you grew up, chances are you have institutional friends and family around. Those are very good things to have.

For a variety of reasons, including too much divorce, and some life choices I made geographically, I live far away from all of the people I used to know. Life-long friends and family. I don’t see them very often.

The only people I have locally are the friends I’ve made (and retained post-divorce) in the nine years I’ve lived here.

It’s one of the reasons writing here and connecting with so many of you has been such a valuable experience. As kind and thoughtful as many of my friends are locally, they all have lives, and no one sits around worrying about what the single 36-year-old is doing, nor should they be.

Staying connected is critical. It lifts you up and reminds you that you’re not alone. And by “not alone,” I don’t mean: Hey, look at all my online friends! I’m not alone!

I mean, you feel wretched and empty.

And one of the most important discoveries is when you find other people who know exactly what’s going on inside you. People walking the same walk. Feeling the same things.

The more connected you feel, the less isolated you are, and the faster you can start to breathe again.

Two years later, I still haven’t found a way to master all the organizational life skills my parents handled when I was young, and my wife handled the first dozen or so years of adult life.

My laundry system is suspect.

I throw away A LOT of food I buy at the grocery store because I don’t know how to shop for one and a half.

I forget little things my son needs for school on occasion—moments which serve as little reminders to my ex-wife how unreliable I can be.

I’m not the best house cleaner.

I’m not a particularly good planner.

I think I am probably my best self with a partner. But when you’re in your mid-thirties and you work full-time and you have your son half the time, meeting people is a massive challenge. I knew it would be hard, but I didn’t realize it would be this hard.

After two years of being single, I find dating to be infinitely easier, and not particularly scary.

That’s not what I mean.

But if you want someone to be the other half of you, things get really tricky.

When you’re single and in your mid-thirties? It generally means you’ve been through some shit.

Said shit keeps the It’s Complicated quotient rather high right up until that moment it doesn’t anymore.

I’ll let you know whether that day ever comes.

Everything’s going to be okay now.

You say it and believe it after six months. Again, after a year. But sometimes it takes this long to feel it on the inside.

After two years, you make your own rules.

After two years, you can go an entire day not even thinking about your old life even once.

After two years, you can drive by where she works every day and rarely turn your head to look for her car.

After two years, you can stop feeling ashamed.

After two years, you can know you’re good enough.

A hundred and four weeks.

The anniversary does kind of hang over your day.

But it doesn’t define your day.

It doesn’t get to decide whether you smile, or how much fun you can have, or block out the spring sunshine.

It doesn’t determine who you get to think about, or how beautiful tomorrow is going to be.

Two years later, you can’t even really remember how you felt.

Because you’re someone else now.